A magnificent William and Mary banister-back armchair, maple and tiger maple. The chair boasts an arched tiger maple crest transitioning to four flat baluster-shaped slats and a tiger maple bottom shaped rail. It also sports ring and cylinder turned stiles, with the rear stiles having prominent button-shaped finials. The curved arm rests terminate in scroll-shaped handholds. The front stretchers sport double ball turnings. The front stiles taper at the feet. The chair is in overall very good condition with an older refinish. There is a glued break to the bottom shaped rail of the backrest and losses to the splint oak seat at the front corners, especially on the left side. The chair dates from the first half of the 18th century.

Provenance: The estate of Charles K. Davis, Jr., Nashville, TN, by descent from his father, Charles K. Davis of Fairfield, CT. Charles Krum Davis, Sr. (1889-1968), was chairman of the Remington Arms Company and a passionate early collector of Americana. With the help of a few important dealers, primarily Israel Sack, Davis assembled what has been called one of the most important private collections of early Americana. His home was profiled in the Magazine Antiques, January and March, 1941. Much of his collection ultimately went to Winterthur and other museums. 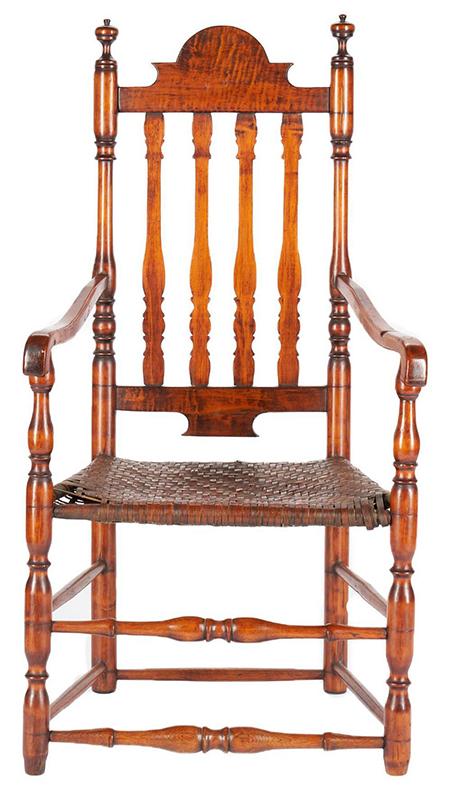